Allyson’s Story: “I wanted to stay active and help others” 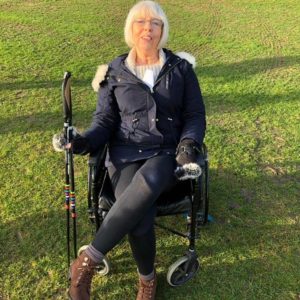 “I contracted Meningococcal in 2014 and was really poorly, then I got sepsis and lost my legs and fingers. In the hospital rehab centre I went to the gym and did exercises which helped strengthen my muscles but when I was discharged from hospital I didn’t know what to do. I wanted to stay active and help others, so I now work as a volunteer at the Mobility Centre City Hospital and as an Activity Advisor for Limbpower.

“I completed a Nordic walking course at Clifton Campus and am one of only four amputees who have done it in the country.  It’s great for core strength and the tops of your legs and arms. It’s not difficult and is quite relaxing.

“I run a little coffee morning support group where other amputees meet and I’ve also welcomed people affected by other illnesses such as cancer, strokes and diabetes. I help lead the way and share as much information as possible about what’s available in the area. I explain to them it’s about doing what you can do. A lot of people live on their own, so it’s a social thing too.

“One member of the group, Gary hadn’t swum for 30 years so we took him and some other who wanted to try swimming to Djanogly Leisure Centre – he loves it and wants to try the gym now.”

Allyson and Gary feature in the It’s For Me campaign trailer, which is aimed at showcasing the accessible facilities at the City Council’s Leisure Centres.