The sponsored swim that had us all in tears

Jayne, a regular at Southglade Leisure Centre, recently completed a thirty-length swim in aid of the Stroke Association – a feat that few healthy individuals could complete. Yet, Jayne recently suffered a life-changing stroke, leaving her with limited mobility and a long road to recovery. Enter the Swim for Health sessions, where Jenna (one of our swimming instructors) worked closely with Jayne to help in her rehabilitation – working to regain her strength as well as independence.

I arrived at Southglade on November 11th 2019 to interview Jayne. The atmosphere in the Leisure Centre was beautiful – friends and family had gathered together in support. They cheered and clapped as Jayne tackled length after length, and by the final lap, there were definitely a few watery eyes. 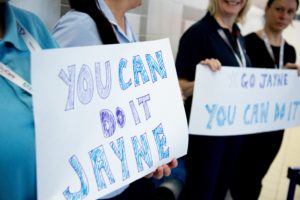 After the swim there were posters and banners carefully hung on the walls, and there were biscuits and coffee cups placed upon tables. People were smiling and laughing – excitedly chattering about how well Jayne had done. You could almost smell the sheer adoration and pride in the air. Sally, one of Jayne’s physiotherapists, smiled as she told me, “Swimming has been a game-changer for Jayne. After her stroke she initially found walking very difficult. She even found sitting up very difficult – she was having to be hoisted – so what she’s achieved is incredible. She lacks confidence in walking on dry land, but in the water, she says she feels free. Swimming has had huge benefits for her confidence, generally. And she’s able to get fit and exercise in water in a way that she can’t on land.”

You could tell that Jayne’s swimming instructor, Jenna, was extremely fond of her too. They would poke fun at each other and make jokes in a way that reminded me of a mother-daughter relationship. When I spoke to Jenna, she couldn’t sing Jayne’s praises enough:

“When we first met her, she couldn’t hold herself in the water – she needed three people to support her body and to keep her steady so that her face wasn’t going under. But she’s made an amazing improvement – she is fantastic. She’s done thirty-one lengths today! She did about three in her first session. It’s great. It’s great to see people grow and change and get help in recovering. Jayne’s part of the family now.”

Jenna then went on to say the same as Sally – that swimming has been paramount for Jayne and that it makes her feel free. She started laughing and also told me that Jayne enjoys a natter in the sauna with fellow Southglade-goers after her sessions.

Jayne’s husband Clive was around for moral support, too. You could clearly see his adoration for her and it was clear that Jayne’s rehabilitation journey had been a team effort between her, Clive and the lovely staff at Southglade. 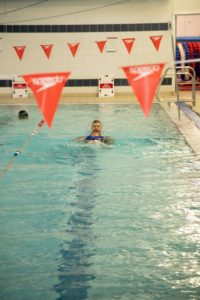 When interviewing Jayne herself, it was heart-warming to see her talk about the centre with such joy. Read her interview below:

How long have you been coming to Southglade Leisure Centre?

How has going to the Swim for Health sessions helped with your stroke rehabilitation journey?

It’s helped me to exercise and it’s helped my muscles, mobility and confidence. It’s been good!

And how have the staff been? How have they helped you?

Gooood! There are really nice staff.

What’s the best thing about them?

When you first started swimming, were you nervous?

Yes. There were people I didn’t know!

What’s the best bit about Southglade?

Swimming! No… the sauna!

What would you say to anyone else who has had a major health problem? What would be your encouraging words?

Swimming! Try it! Have a goal and do it! It helps – my pain’s gone and my heavy body is gone. It makes me feel fabulous and free.

What made you do the sponsored swim today?

I wanted to help people raise money to help the people who helped me.

When you saw everyone here today, how did you feel?

Now that you’ve finished the swim, how do you feel?

Good… amazing! It was hard work though! I did thirty-one lengths and the maximum amount I’ve done before is sixteen. 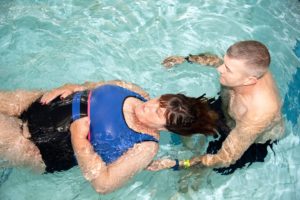