Can this brown gal swim? The final day!

It’s the final day of Summaya’s challenge and the Brown Gal Can’t Swim podcast and if you’ve stuck with us this far, you’ll have heard Summaya talking about why she is learning to swim at 27, changing rooms within swimming facilities, modesty and swimwear, plus why you should learn to swim given the apparent dangers with water. 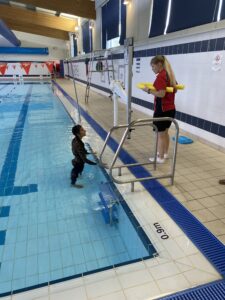 Now, if you’ve not listened to the final day of the podcast series, then below are some spoilers!

Let’s rewind to a cold, wet and windy day in Nottingham and a team of supporters (plus some open water swimmers) headed to Spring Lakes to watch Summaya take on her final task – a 500m open water swim.

Summaya is putting on a brave face as she mentally prepares for the swim and kindly snaps some images with our team and is interviewed by the BBC. She’s compiled a Brown Gal Can’t Swim playlist for everyone to listen to as she counts down the time before she gets into the cold lake.

As it nears 4 pm, the nerves are kicking in – it is a miserable day weather-wise, she’s paranoid about the swans and ducks plus a lot of emotions are racing through her mind – however, her swim coaches are here (Nottingham Swim School teacher Victoria Charles and Her Spirit’s Mel Berry), plus Olympian Alice Dearing providing words of calm, encouragement and advice as she prepares to get into the water. As she pops back into the changing room for a pep talk with her brother, she decides she needs a moment alone, saying: “(I’m) feeling really nervous….I’ve got butterflies….but I’m feeling ready – let’s do this”.

Right before she gets in the water, she listens to Ella Henderson’s Ghost to help calm her.

The time is now 4:15 pm and Summaya begins her swim, taking it in her stride, like a duck to water! She swims the first 200m using a variety of strokes and is looking strong, but then stops and it looks as though she might be struggling….. But after a few words of encouragement and advice from the boat (with one of her coaches, Mel Berry, who is following), she powers on.

All the while Summaya is in the water, there are groups of swimmers also in the lake. They join her for the last push – providing an open water swim supporter group! Everyone is on the bank cheering and shouting to Summaya for the home stretch and the sound is deafening! 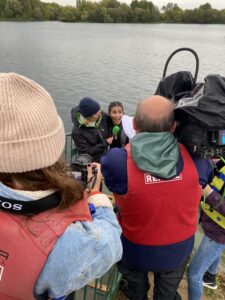 At 4:39 pm, 24 minutes after she started the swim Summaya has done it! Summaya has swam 500m in open water after only learning how to swim 8 weeks ago – what an amazing achievement.

As she leaves the water, she tells the crowd (who have now gathered) “That felt like a lot. It was really really hard….eight weeks ago I literally couldn’t swim and today I’ve managed to do 500m in open water. If I can do it, and I could not swim at all, then anyone can do it! no matter how embarrassed you might feel about not having a (swimming) skill, it could save your life. with the right support and the right people around you, you can make it happen”. 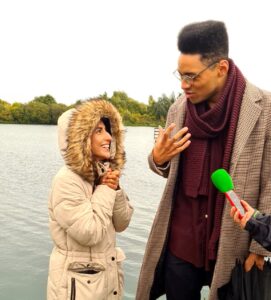 Can this Brown Gal Swim? She sure can and she did an incredible job! To listen to the Brown Gal Can’t Swim series in full, click here.

Get Out Get Active Nottingham has been honoured to work alongside Active Nottingham in supporting Summaya Mughal’s Brown Gal Can’t Swim campaign. The values of the project of supporting more people to be more active and overcoming the barriers faced to being active perfectly aligns with the campaign’s ambitions to address the lack of South Asian and other ethnic minority swimmers in our pools across the country.

Swimming is a fantastic activity for people of all ages and all abilities, including people with disabilities and long-term health conditions, that has multiple benefits both for our physical and mental wellbeing. However, for many who have never learnt to swim, or who have anxieties about accessing a pool, it can feel really overwhelming and can prevent people not only from accessing swimming pools but also from gaining the vital life skill of swimming and being safe in the water.

Through the GOGA project, we have worked on a number of swimming initiatives such as the development of our Swim for Health programme across the six Active Nottingham pools which provides a public swim in a quieter setting with the support of flotation aids within the pool and other supportive equipment such as gradual steps.

However we know that often the biggest barrier can often be overcoming the mental and emotional barriers and that’s why we are so inspired by the work of Summaya and her Brown Gal Can’t Swim campaign and it’s endeavour to break down the stigma around learning to swim or accessing support to enjoy swimming and we are proud to have been a partner, alongside Active Nottingham, in this work.

If you’ve been inspired to take up swimming, get in touch with Nottingham Swim School today and see how we can help you on your own swim journey.