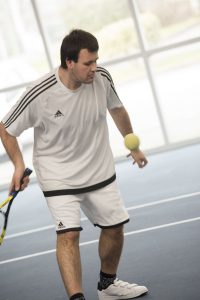 Jack, aged 25, who has been visually impaired from birth, travels to the Nottingham Tennis Centre once a week to play Visually Impaired Tennis and train for Regional and National tournaments around the Country.

“Give it a go, you might be better than you think.”

The Friday evening session that he attends from 6-7pm is open to all ages and abilities, with the youngest player being just ten years old.

You don’t have to be a member to play and you don’t need any expensive equipment either, as the centre provides rackets and an “audible” foam ball, which is attached to a bell to help you find its location.

In many ways, the game is the same as the national game played by the likes of Andy Murray and Novak Djokovic, it’s just played on a Junior Orange court with a lower net.

Jack and his fellow players are allowed one to three bounces of the ball, depending on their visual impairment, of which there are five categories: B1 (blind) through to B5 (almost fully sighted). Jack falls under B3, and so gets two bounces of the ball. 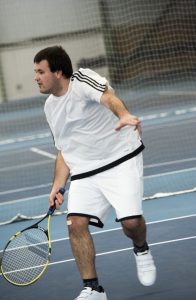 “It’s great fun and I’d love more people to play as it would give more variety at the tournaments I play in.”

Jack was just four years old when he started playing tennis after his Dad searched for a sport that they could play together. He’s really keen to create a legacy and encourage others to try it out too, at least once.

He’s so keen he even offers to mentor anyone who’s nervous about doing something new – offering to meet them at the Tennis Centre to welcome them and put them at ease.

For the last five years, Jack has regularly travelled to play both singles and doubles matches competitively in tournaments at Loughborough, Birmingham, Newcastle and London. His proudest achievement so far has been his recent reaching of the quarter finals, but he claims it’s not about winning – it’s about taking part and being active.

“There’s always someone better than the person at the top,  they just may not have started playing yet.”

Besides playing tennis and studying for his PHD at Derby University, Jack also loves walking and enjoys playing chess – something he modestly admits to being fairly good at, as he was once within the world’s top 7000 players. 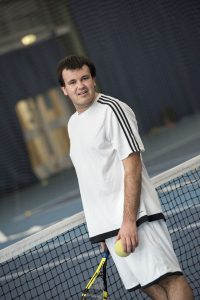 If you live in Nottingham City and have a registered disability you can save up to 50% discount off activities, so join Active Nottingham today!