News & Events / GOGA success at Notts Getting Active Together Awards

GOGA success at Notts Getting Active Together Awards

Get Out Get Active (GOGA) Nottingham celebrated a successful night at the Notts Getting Active Together Awards!

On Thursday 5 March 2020, Active Notts hosted their second Notts Getting Active Together Awards at Lakeside Arts.

It was a fantastic evening that saw both the Get Out Get Active Nottingham project and project participants and partners win a host of awards celebrating their active journey!

Two Swim for Health participants, Glyn Plummer and Jayne Morton, stole the show winning the first two awards. Glyn was the winner of the ‘Change 4 Life’ category, awarded to an individual who has dramatically increased their activity levels over the last twelve months. 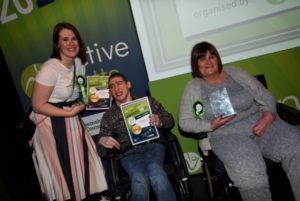 Glyn has cerebral palsy and minor Autism and uses a wheelchair. Over the last few years, Glyn has gone from doing no exercise to becoming a regular at the GOGA Swim for Health sessions, attending several times a week and building meaningful relationships with the fantastic Poolside Helpers.

Next up was the This Girl Can award, awarded to a female who has dramatically increased their activity levels over the last twelve months, won by second the Swim for Health participant of the night, Jayne Morton.

Jayne had a stroke in April 2018 which caused her to spend three months in hospital. In April 2019, Jayne and her husband Clive started swimming at the Swim for Health sessions at Southglade Leisure Centre. At these sessions Jayne was also supported by receptionist Annmarie and Swim for Health Poolside Helper Jenna.

Jayne’s progress has been fantastic!

She has progressed from needing to be completely supported in the water to beginning to swim independently. Jayne has also started to walk a little again thanks to her hard work in the pool. Jayne also undertook a sponsored swim to raise money and awareness for the Stroke Association, achieving an amazing 31 lengths.

Other winners of the night included local partner Flo Skatepark for the Active Place award and Evolve Boxing with the Live Team, an initiative developed through the GOGA project, for the Project/Initiative/Innovation of the Year award.

Finally, the GOGA project was recognised as the winner of the Inclusive Project of the Year award: acknowledging three years of amazing participants and fantastic partners across the community promoting fun and inclusive activity for all.

If you would like to be more active through fun, inclusive activity, follow ‘Get Out Get Active Nottingham’ on Facebook to find out about all the latest opportunities and ideas to remain active at home.

You can also read more about both Jayne and Glyn’s stories.