Stand up to mental illnesses 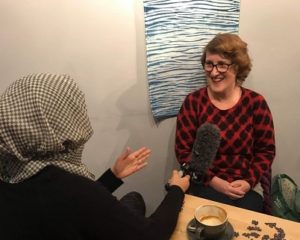 Jo set up the Kickback Club after having first hand experience of living with a mental illness.

I was admitted into hospital for depression in 2016. Yet, when I was discharged, I actually felt more unwell due to the trauma of being hospitalised. That was my first episode of mental illness. I found conversations and being around others difficult as the only topic on my mind was my illness and the medication I was taking. But I missed people. I still wanted to hang out but not have to say or do anything.

It all started when I asked the owner of the café on Haydn Road if he would be interested in me starting a club and he said yes! The first session was just me and my friends. Then I created a flyer and other people started coming along. Three years later we have a stable group, some people have come and gone.

For those who want to, we now do a walk at the beginning of the night which has brought more people to the club. We also do jigsaw puzzles, play games and have colouring exercises.

I have had contact with a number of mental health services, from inpatient and crisis teams, to step four counselling and charity support.

I personally found OT support in my return to work – and counselling from local charity Harmless – invaluable. Harmless helped above all others, allowing me to learn to cope with distressing intrusive thoughts, helping me to develop an understanding of my experiences, giving me coping skills and teaching me self-compassion.

As well as supporting others, the Kickback Club benefits me personally; it gets me out of the house, it makes me feel like I am doing something and it maintains a social network that might have otherwise dropped off. It has opened up new social connections and being responsible for the group keeps me going!

It’s opened up a dialogue with other people who have had similar experiences. It really helps when there is understanding and empathy, you can form an instant bond.

The Facebook page @RecoveryCrew advertises Kickback Club, and shares other local groups and activities, useful articles, and creative approaches to developing dialogue about mental illness, including cartoons, podcasts and poetry.

The club is supported by a local textile artist, Dawn Abey, who donates part of the proceeds from her “kit bags”, which are self-care bags that are available on Etsy and in Green Emporium on Haydn road.

The Kickback Club is described as a club for people who are struggling with their mental health in Sherwood, Nottingham. Friends are welcome and it’s a safe space to relax, write, doodle, play games or just be.
They meet on the first Monday of every month at 7.30pm – 8.30pm in Divine Coffee House, Haydn Road, Sherwood. Meet outside at 6.30pm for a walk (if you want to).